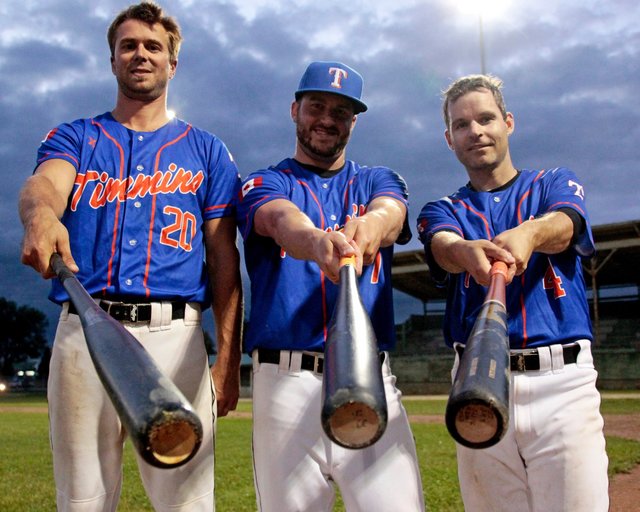 TIMMINS - The Timmins Mets will be looking for a measure of revenge when they host the Nickel City Nickels for three games at Fred Salvador Field on Aug. 26-27-28 to close out the Timmins-Sudbury Baseball Weekend Series.

The Nickels slugged their way to a three-game sweep of the first set of the series in Sudbury back in June, but Mets infielder Jamie Dallaire and his teammates believe home-field advantage could be the difference this time around.

“We lost all three, but they were all well-played games,” commented Dallaire, whose Mets squad is made up of players from teams in the Timmins Men's Baseball League. “We're looking to sort of pay them back a little bit for those three losses we had when we went there.”

A unique opportunity for fans, the Weekend Series in Timmins will offer as true a baseball experience as one could hope for, complete with music, nine-inning games and a Saturday afternoon Home Run Derby.

Unfortunately, plans for an on-site beer garden fell through, but organizers are hopeful it could be an option in future years.

The Timmins set of the series will open with Game 1 on Friday, Aug. 26 at 8 p.m. at Fred Salvador Field.

The Home Run Derby will highlight Saturday's festivities, beginning at 1 p.m. with around five players aside competing for a cash prize as they try to hit as many balls as they can over the fence at Fred Salvador Field. Game 2 of the series will be played after the derby at 4 p.m.

The series will close out with Game 3 on Sunday afternoon at 1 p.m., and the Mets players hope they'll be able to count on the fans all weekend to back up the home team.

“We're hoping to have some people come out and watch,” said Dallaire. “We're thinking it's going to be some very good baseball.

“We've got the music playing, we've got the scoreboard working again and the lights working, thanks to the City of Timmins, so we're expecting to get a decent crowd here like we do for (TMBL) playoffs. Hopefully we can get the same thing going for the weekend.”

Marc-André Lavoie, a right-handed pitcher and infielder for the Mets, recalls playing baseball growing up in the Timmins area with and against a number of players from either team.

Though the sport's popularity in Northern Ontario isn't what it once was with the old Porcupine Baseball Mines League and the likes, the passion is still certainly there, no matter where you go.

“We've been asked for three years to do this and this year we just finally found that everyone was able to play and we got it together this year,” said Lavoie.

“It's nice to get the guys back together. Some of the guys from Sudbury, we've been playing with since we were kids. We used to play in the Northern Elite League when it used to exist and now we're all adults and we play for fun, but we're still proud ball players and we still like to match up against them.”