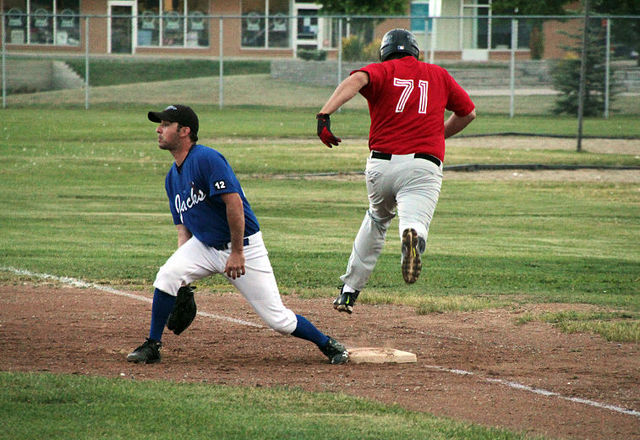 TIMMINS - The Red Sox handed the Whiskey Jacks their first loss of the Timmins Men's Baseball League season on Wednesday before the Jacks salvaged the second game of a doubleheader later in the evening.

The first matchup between the two teams began on Monday night but was rained out with the game tied 2-2 in the bottom of the fifth.

With the Red Sox and Whiskey Jacks already scheduled to meet again on Wednesday, the teams took to the field early for the shortened doubleheader.

In what turned out to be one of the longest pitchers' duels in recent memory, Eryk Rice for the Sox and Cedric Bradette for the Jacks each picked up where they left off from Monday into Wednesday. Both pitchers were impressive and went the distance, but Rice came out on top in a 6-4 Red Sox win.

The Whiskey Jacks jumped out to an 2-0 first-inning lead on Monday. With Rice looking to find his groove on the mound, leadoff batter Pete Devcich singled, advanced on a Conredge Solomon error in left field, and scored on a Jonathan Minard double.

Minard advanced to third on a pass ball and came home on a Corey Bechard sacrifice fly to make it 2-0.

Things didn't start much better for Bradette in the bottom half of the first. Leadoff batter Brent Cleverdon walked and Rice reached base on Jacks' shortstop Adam Shipway's error. Bradette then walked Sheldon Lacroix to load the bases, and Tim Chalmers' fly ball to left field was far enough to plate Cleverdon and cut the lead to 2-1.

However, with the rain already beginning to pour down, Bradette was able to wiggle his way out of the jam after forcing Joe Lepage to ground into a fielder's choice and Randy Rice to hit an easy pop fly.

Both pitchers settled down from then on. Scoring didn't resume until the Red Sox half of the third, when Lacroix knocked in Eryk Rice with a single to make it 2-2.

In the bottom of the fifth, the Red Sox threatened to add more. Though John Schumilak was tagged out trying to score, the Sox still had men on second and third with only one out.

Then Mother Nature really decided to have her say in things.

The heavy rain and lightning forced the game to be postponed and restarted prior to Wednesday's rematch.

On a much clearer evening at Fred Salvador Field on Wednesday, the Sox took advantage of their runners in scoring position — and then some.

Bradette's third pitch flew past his catcher to the backstop, allowing Cleverdon to score and make it 3-2 Sox. After Eric Comtois walked and stole second base, Lacroix plated Eryk Rice with an RBI single. Randy Rice — no relation to Eryk — followed that up with a double, driving in Comtois and Lacroix and giving the Sox a 6-2 lead.

The Jacks did their best to get to Rice on the mound in the top of the sixth, managing to cut the lead to 6-3 when Jamie Dallaire brought Chris Greer home with an RBI double.

The Whiskey Jacks added another in the top of the seventh to make it 6-4, but that's as close as they'd get.

Rice pitched all seven innings to pick up his first win of the season, allowing four earned runs on seven hits. He struck out nine batters and only walked one.

Neither team had long to dwell on the results. And if the first matchup was a relatively low-scoring affair, the second game of the doubleheader wasn't so kind to the pitchers.

Chris Greer and Matt Bechard each and three RBI as the Whiskey Jacks (3-1) avenged their first loss of the season with a 16-10 drubbing of the Red Sox (2-2).

In a reverse scenario of Wednesday's first game, the Red Sox went up 2-0 in the opening inning off Whiskey Jacks' starter Garret Latourelle. The Jacks responded in their half of the first inning, cutting the lead to 2-1 on a Greer RBI single.

Latourelle helped out his cause in the bottom of the second inning, drawing a walk from Red Sox starting pitcher Stephane Cloutier. Latourelle eventually came around to score, along with Adam Shipway, on a Corey Bechard double that made it 3-2 for the Whiskey Jacks.

After a wild pitch, Cloutier was pulled from the game and replaced on the mound by Randy Rice.

The Whiskey Jacks showed no mercy for the incoming pitcher, adding four more runs in the inning to make it 7-2.

The Red Sox didn't quit though, scoring five runs of their own and making it 7-7 in their half of the third, highlighted by a pair of two-RBI singles by Joel Ahrens and Marc Drouin.

Greer, generally regarded as the league's top pitcher, continued his prowess at the plate for the Jacks, hitting a double in the bottom of the third that plated Shipway and Dallaire and put the Whiskey Jacks up 9-7. They added another run in the fourth inning to hit double digits.

With Latourelle cruising on the mound midway through the game, the Whiskey Jacks exploded for a six-run fifth inning.

The Red Sox didn't help their pitcher at all, committing a trio of costly errors at shortstop, second base and left field, respectively. A pair of wild pitches did nothing to help the cause, and it was 16-7 by the time Rice got out of the inning.

The Sox attempted to make it interesting in the top of the sixth. With Jamie Dallaire on the mound for the Jacks, Dan Fortin struck out, but Comtois, the Jacks' catcher, couldn't handle the pitch cleanly. Fortin scampered safely to first, and eventually came around to score on a wild pitch.

The sloppy defense seemed to be contagious, as the Whiskey Jacks' shortstop Pete Devcich and third-baseman Corey Bechard each committed errors to allow the Sox to cut the lead to 16-10. Dallaire, Bradette and Mitch Bolduc did combine to turn a key double play and limit the damage for the Whiskey Jacks.

Dallaire came out to close the game in the seventh, and absolutely shut down any hopes the Red Sox might have had. After walking Lacroix, Dallaire struck out Lepage, Conredge Solomon and Fortin in order, emphatically ending the game.

Latourelle picked up his first win of the season for the Whiskey Jacks, going five innings, allowing seven earned runs on eights hits and striking out one. Dallaire tossed two innings with four strikeouts and was credited with the save.

Randy Rice took the loss for the Sox, giving up nine earned runs in four innings and striking out a pair.

Cloutier was tagged with four earned runs over one inning pitched, while Cleverdon pitched a scoreless seventh with two strikeouts.

The Whiskey Jacks continue to sit atop the four-league standings, and the Red Sox sit just a half-game behind the Orioles (2-1). As of Wednesday's games, the Expos (0-3) were still looking for their first win of the season.

The Red Sox next take to Fred Salvador Field for a game against the Expos on Monday, June 30 at 7 p.m., while the Whiskey Jacks take on the Orioles on Thursday, July 3 at 7 p.m.