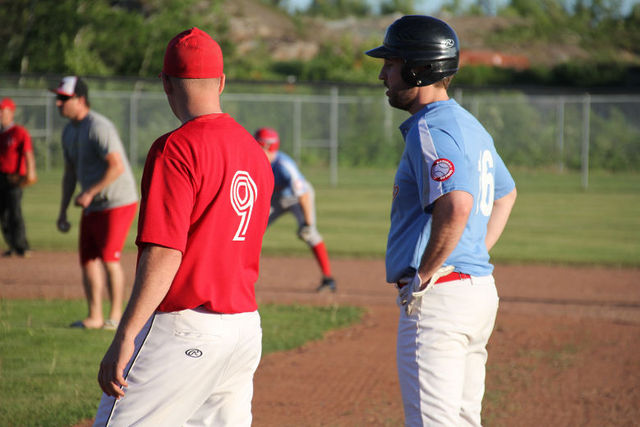 TIMMINS - It was a wild opening night in the Timmins Men’s Baseball League, as the Red Sox mounted a comeback for the ages and shocked the Expos 13-12 in extra innings on Monday.

The Expos, who gained a half-dozen new players in the offseason after finishing last in the league in 2013, held multiple leads, including an early 3-0 advantage in the top of the first inning.

The Expos’ leadoff batter Frankie Gagnon reached base on an error by Red Sox first baseman Randy Rice. Dave Chantigny followed that up with a line drive single, then stole second base.

The Red Sox didn’t have an answer for Expos’ starting pitcher Dave Quachegan in the bottom of the first, but got on the scoreboard in the second inning after Randy Rice drove in teammate Ryan Dubeau with an RBI ground-out.

Quachegan walked Conredge Solomon, but struck out Brent Cleverdon to get out of the inning.

The Expos missed a chance to extend their lead in the third, as Rice got into his groove on the mound. The Red Sox pitcher nimbly snagged a line drive by Chantigny, caught an infield pop-up by Moloci and forced Kurt Foisy to ground out to eliminate the Expos hitters in order and keep the game at 3-1.

It wouldn’t stay that way for long, however, as costly defensive mistakes by the Expos allowed the Red Sox to get back into the game.

After Rice reached base on a dropped ball in left field, Sheldon Lacroix walked and Marc Drouin reached base on a throwing error from third baseman Thomas Scripnick, allowing Rice to come in to score. Dubeau then tied the game up at 3-3 with an RBI single, driving in Lacroix.

The Expos still couldn’t get anything to hit from Rice in the fourth inning, and the Red Sox took their first lead of the night during their turn at bat. The leadoff batter Cleverdon walked, stole second, got to third on a ground-out and scored on a Quachegan pass ball.

The Expos didn’t wilt though, and stormed back to take a 7-4 lead under a clear sky at Fred Salvador Field.

Thomas Scripnick walked and was driven in after Stephen Morgan’s single to left field was mishandled by Paul Evans. Moloci drove in Morgan with an RBI single, and Chantigny came in to score on Stephane Cloutier’s error at first base. Rice’s first big mistake of the game, which was scored as a pass ball, allowed Moloci to come home to score.

It was Quachegan’s turn to heat up on the mound in the fifth. The only blemish came when Dubeau came in to score on Morgan’s error at shortstop.

Quachegan helped his own cause during the Expos’ next turn up at bat, as he got on base, stole second and third, and came in to score on a heads-up base-running play. Rice got Gaudet to strike out, but the catcher dropped the ball, allowing Gaudet to run towards first base. Gaudet was thrown out at first, but Quachegan sensed the opportunity and sprinted home to give the Expos an 8-5 advantage.

The lead grew to 10-5 after Morgan drove in teammate A.J. Anthony, and Scripnick scored on a pass ball.

But the Red Sox proved no lead is safe in the TMBL.

After Rice reached base on a fielder’s choice and Lacroix hit a single in the sixth, Joe Lepage brought them both home on an RBI single to make it 10-8. A few Expos’ mistakes later, capped off by a Cleverdon RBI single, and the score was tied at 10-10.

As often was the case on this night, the pitcher was once again let down by his defense.

After Quachegan struck out Lacroix, Lepage reached base on an error. After Dubeau singled, Lepage was gunned out at third base by Expos left-fielder Anthony, who one-hopped the throw directly to third in plenty of time.

After Paul Evans was walked and Dubeau stole third and scored on a pass ball, however, Cloutier hit a single to left field that dribbled through Anthony’s legs, allowing Evans to come home at tie the game once again at 12-12.

The game was sent into extra innings, and that was finally too much to overcome for the Expos.

After the Expos were unable to muster anything at bat, Moloci came in to relieve Quachegan, who threw upwards to 150 pitches on the night.

With the bases loaded after a Comtois single and back-to-back walks, the matchup finally found a winner when a pass ball allowed Comtois to sprint home and seal the walk-off win for the Red Sox.

Rice pitched five innings and had seven strikeouts for the Sox, while Comtois was credited with the win for coming in in relief. Cloutier lead the way with two RBI for his team, while Dubeau went 4 for 5 with one RBI and three stolen bases.

Quachegan struck out 10 batters in his seven innings of work, settling for the no decision. He also went 3 for 3 at the plate with one walk, one RBI and two stolen bases. Moloci picked up the loss, though he led the Expos on offense, going 3 for 4 with two RBI.

The Orioles and the defending league champion Whiskey Jacks were set to debut their season on Tuesday night at 7 p.m. at Fred Salvador Field.

The Red Sox and Orioles play Wednesday, June 18 at 7 p.m., while the Expos take on the Whiskey Jacks on Thursday, June 19 at 7 p.m.

Of note, Monday night’s game was the first to be ever played under the newly installed evening lights at Fred Salvador Field.