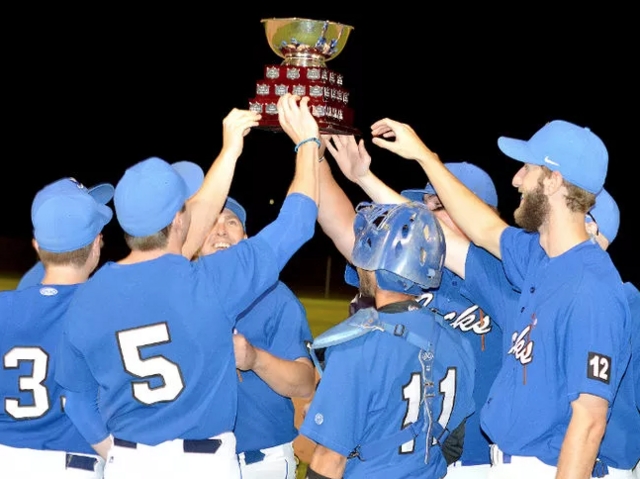 Leading the best-of-five championship series 2-0 heading into Game 3, the Whiskey Jacks dominated — on the mound, at the plate and in the field — en route to a decisive 8-0 decision over the Champoux Homes/Wacky Wings Orioles.

First baseman Owen Rigg, who has been part of the Whiskey Jacks last three championships, was all smiles following the contest.

“The key is the leadership with have on our team with guys like (Jamie) Dallaire and (Chris Greer) Greersie and Cedric Bradette, who constantly keep us calm,” he said.

“The constantly keep us focused and keep us on point. We play better defence than a lot of teams and that’s what gets it done for us.”

When it comes to leadership, a lot of the credit for the Whiskey Jacks incredible 15-year run has to go to manager Ron Greer.

“He is a hall of famer and we are proud of him,” Rigg said.

“He definitely teaches us a lot, things like small ball and the simple things in the game you need to do to win these kinds of championships. He really makes a difference for us.

“He really does a great job of getting new guys to show up and make a contribution constantly.”

A pair of first-inning runs would prove to be all the run support Chris Greer, the Whiskey Jacks dominating ace, would need, but his teammates ensured he had lots of insurance, just in case.

Chris Greer, who was great in Game 1 of the series, was pretty darn good Monday night, as well, allowing the Orioles just two hits, while striking out 12 and not allowing a walk to register the complete-game shutout.

“It is unbelievable to watch him do what he does on the mound,” Rigg said.

“I think there is some stat out there that he hasn’t lost a game in 15 years (records on the TMBL website only go back to the 2013 season, but Greer is 23-0 with a 1.02 earned run average over that period).

“That is testament to his skill level and his ability to throw the ball across the plate. You never feel like you are going to lose when he is out there on the mound. It is a great feeling playing behind him and knowing he is going to get the job done.”

Rigg is planning to be back in the Whisky Jacks blue and white next season to hopefully help them claim a 16th-straight TMBL championship.

“I have definitely enjoyed my time with these guys,” he said.

“Hopefully, we can do it again next year.”

Dallaire led off the game with a double for the home side and moved up to third base on an error by Orioles starting pitcher Mario Fillion.

An error by Orioles first baseman Dani Durepos then allowed Dallaire to come in and score the game’s first run and Jamie Dagenais, who had reached base safely on the Fillion error, to move up to second base.

After Greer was walked, Dagenais advanced to third base on Jonathan Minard’s single.

Bradette followed with a sacrifice fly to left field that allowed Dagenais to score the Whiskey Jacks’ second run.

The Whiskey Jacks plated three more runs in the bottom of the second inning to increase their advantage to 5-0 and pretty much take the wind out of the Orioles’ sails.

With one out, Dallaire was hit by a pitch and consecutive singles by Dagenais and Chris Greer loaded the bases.

Minard then reached base on Durepos’ second error of the game, which allowed Dallaire to cross the plate.

The Whiskey Jacks added a single run in the bottom of the fourth inning to push their lead to 6-0.

Chris Greer drew a one-out walk, moved up to second base when Minard was also walked and then moved up to third and came in to score on a pair of passed balls.

The Whiskey Jacks closed out the scoring when they added two more runs in the bottom of the fifth inning to make the final 8-0.

Nick Hway reached base and was able to advance to second on an error by James Daschuk, who had moved to first base for the Orioles.

After Alain Quevillon was hit by a pitch, an error by Orioles second baseman David Tambeau allowed Dallaire to reach base and Hway to move up to third base.

Dagenais then drew a bases-loaded walk that allowed Hway to cross the plate.

Chris Greer then hit into a fielder’s choice that allowed Quevillon to score the game’s final run.

With their season on the line, the Orioles went down one, two, three in the top of the seventh inning, as Greer struck out the side.

Daschuk, who had the honour of making the final out, had one of the two hits off Chris Greer, a lead-off single in the second inning, while Fillion’s one-out fourth inning single was the other.