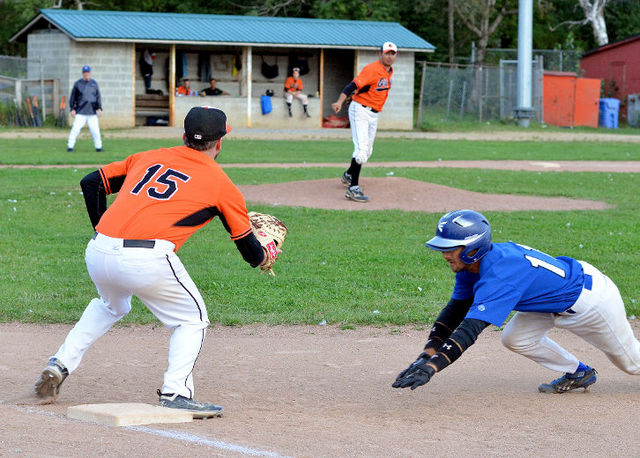 TIMMINS - The Whiskey Jacks are one win away from sweep of the Champoux Homes/Wacky Wings Orioles and their 15th-straight Timmins Men’s Baseball League championship.

A 10-6 win in Game 2 of the best-of-five championship series Wednesday night at Fred Salvador Field gave the Whiskey Jacks a commanding lead in the series.

The Orioles, who finished first during the regular season, contributed to their own downfall Wednesday night by playing shoddy defence and making a number of costly errors.

A pair of those Orioles errors led to the Whiskey Jacks plating three runs in the top of the second inning to jump out to an early lead.

Jonathan Minard walked to lead off the inning, advanced all the way to third base when Cedric Bradette reached base on an error by Orioles third baseman Mario Fillion and then came in to score the game’s first run when Orioles short stop Marc-Andre Lavoie made an error on the very next play that allowed Mike Kazienko to reach base safely.

After a Ryan Anderson single, Nick Hway drew a bases-loaded walk to force home Bradette before Jamie Dallaire’s sacrifice fly to centre field allowed Kazienko to cross the plate with the Whiskey Jacks final run of the inning on a close play.

The Orioles battled back with a pair of runs in their half of the frame to cut the visitors’ advantage to 3-2.

Fillion reached base safely and was able to move up all the way to third on a throwing error by Anderson, who was playing third base for the Whiskey Jacks.

The next batter, Joey Chartrand, was hit by a pitch and an error by Kazienko, who was on the mound for the Whiskey Jacks, allowed Fillion to come in and score and Chartrand to move up to second base.

Chartrand then advanced to third base when Pat Durepos grounded out to short stop and came in to score on a wild pitch.

The Whiskey Jacks responded with a single run in the top of the third inning to expand their lead to 4-2.

Kazienko reached base on a fielder’s choice, then moved up all the way to third base on an Anderson single and came in to score on an RBI single from Hway.

The Orioles scored three runs in their half of the frame to erase their two-run deficit and take a 5-4 advantage after three complete innings.

Lavoie walked to get the ball rolling, moved up to second base on a Mike Barber single and then came around to score on James Daschuk’s RBI double.

Barber was able to score on a wild pitch and that allowed Daschuk to advance to third base.

When Fillion was able to reach base on a fielder’s choice, Daschuk then came in to score the go-ahead run.

Any momentum the Orioles were able to gain from the rally quickly dissipated in the top of the fourth inning, as the Whiskey Jacks scored five runs to take command of the contest.

An Orioles’ error once again contributed to the uprising.

Dallaire singled to lead off the inning and moved up to second on a Jamie Dagenais sacrifice bunt.

After Minard drew a walk, Dallaire came around to score on Bradette’s RBI single.

Kazienko followed with a single of his own to load the bases for the visitors.

An error by Orioles right fielder Jeff Guillemette allowed all three Whiskey Jacks to come in to score and Andreson to reach base safely and advance to second.

Hway then delivered an RBI double that scored Andreson with the Whiskey Jacks’ fifth and final run of the inning.