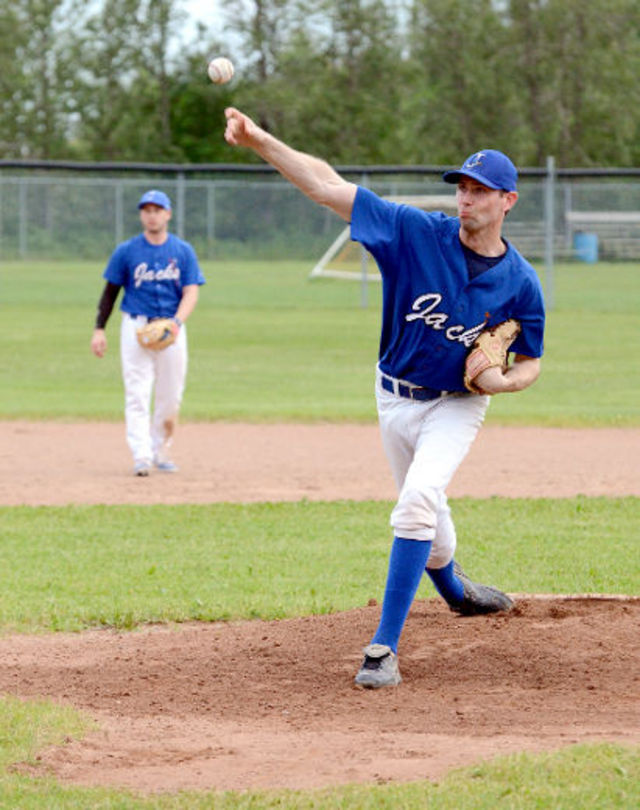 Chris Greer tossed a four-hit shutout as the Whiskey Jacks blanked the Moneta Pub & Grub Brewers 3-0 in Game 1 of their best-of-five semifinal series.

The ace struck out 14 batters and issued just one free pass en route to the complete game victory.

His mound opponent, Dave Quachegan, was almost as impressive, as he three a no-hitter, but surrendered three runs — only one of which was earned. The right hander struck out five batters, but also walked four in the contest.

Greer got all of the offensive support he needed in the bottom of the first inning, when the Whiskey Jacks plated a pair of runs to pull in front 2-0.

Jamie Dallaire drew a lead-off walk to get the ball rolling.

Dallaire was able to move up to second base when Brewers first baseman David Chantigny was unable to handle the throw on a pick-off attempt.

He then advanced to third base on a passed ball and came in to score when Jamie Dagenais reached base on an error by Brewers short stop Stephen Morgan.

Dagenais then proceeded to steal second base and move up to third on an overthrow from Brewers catcher Sheldon Belanger.

Two outs later, Dagenais was able to score the Whiskey Jacks second run as teammate Ryan Anderson reached base on Chantigny’s second error of the inning.

The score remained 2-0 in favour of the home side until the bottom of the second inning, when the Whiskey Jacks were able to score a run and increase their lead to 3-0.

Dallaire drew a two-out walk and stole second base.

He was then able to score from there, as Dagenais reached base on Morgan’s second error of the inning and third of the game.

The Brewers were only able to get a runner as far as third base twice during the contest.

He was left stranded their, however, when Chad Schewendeman also grounded out to the pitcher.