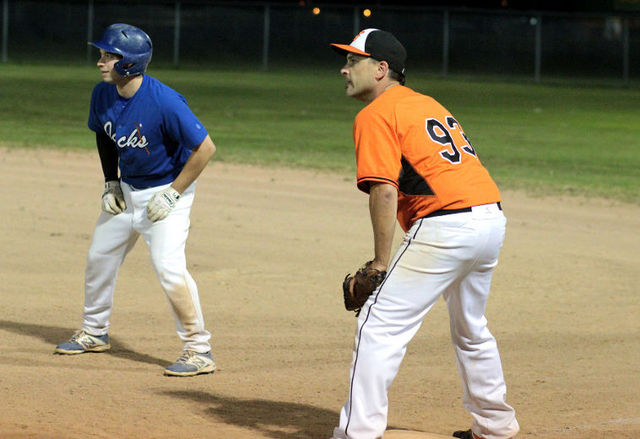 TIMMINS - The Timmins Whiskey Jacks defeated the Champoux Homes/Wacky Wings Orioles 12-8 to pull within a half game of the Timmins Men’s Baseball League leaders Tuesday night at Fred Salvador Field.

A seven-run first inning proved to be the difference for the home side.

After spotting the Orioles a 1-0 lead in the top half of the opening frame — with Mike Barber’s RBI double knocking in Mario Fillion, who had reached on an error by Whiskey Jacks third baseman Ryan Anderson — the home team sent 13 men to the plate in the bottom of the inning.

Jamie Dallaire got the ball rolling for the Whiskey Jacks when he drew a lead-off walk, advanced to third base on a Jamie Dagenais double and then raced home on a passed ball.

Chris Greer was then hit by a pitch and he and Dagenais moved up to second base and third respectively on a passed ball before Brett Andrews smacked a two-out, two-run single to score both of them.

Owen Rigg was then hit by a pitch before Corey Bechard reached base on an error that allowed Andrews to score.

Bechard then stole second base and he was able to reach third on a passed ball that saw Rigg come in to score.

Bechard and Alain Quevillon, who walked, then came around to score the inning’s final two runs on Dallaire’s two-run single.

The Orioles battled back to score five times in the top of the second inning and cut the Whiskey Jacks lead to 7-6.

Darren Thib tripled to drive in Pat Durepos, who had singled, and Joey Chartrand, who had walked.

Shane Gannon followed with an RBI single to plate Thib with the Orioles third run of the frame.

Gannon, in turn, came around to score when Fillion reached base on a fielder’s choice.

Eric Paquette, who had walked before Fillion came to the plate score the Orioles final run of the frame on Barber’s RBI single.

The Whiskey Jacks scored three times in their half of the inning to extend their lead to 10-6 heading to the third inning.

Anderson and Andrews then both came in to score when Bechard reached base on an error by Barber, who was playing first base for the Orioles.

Rigg then chugged home to score the Whiskey Jacks third and final run of the inning on a passed ball.

Neither team scored in the third inning, but the Orioles struck for a run in the top of the fourth inning to cut the Whiskey Jacks’ lead to 10-7.

Paquette drew a two-out walk and then came in to score on Fillion’s RBI double.

The Whiskey Jacks responded with a pair of runs in their half of the inning, to extend their lead to 12-7.

Anderson was hit by a pitch in his second-straight plate appearance and eventually came around to score on a passed ball.

One out later, Rigg drew the first of three-consecutive Whiskey Jacks walks and then raced home to score on Michael Duciaume’s RBI single.

The Orioles countered with a single run in the top of the sixth inning to cut the Whiskey Jacks’ advantage to 12-8, but that is as close as they would come to getting back on even terms.

Scott Durepos singled to lead off the inning and then came around to score on Eric Boulard’s RBI double.