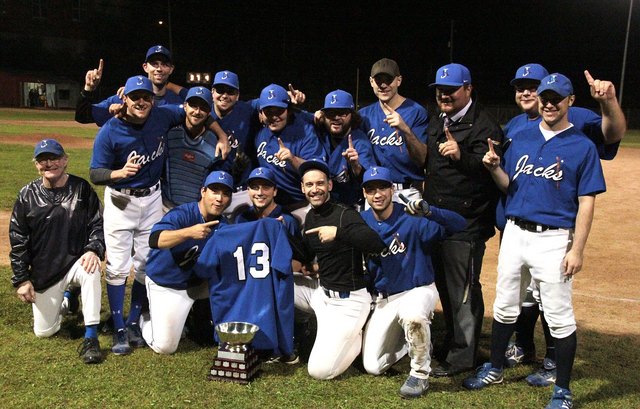 TIMMINS - It's long been debated whether the number 13 is lucky or not.

The Whiskey Jacks submitted a strong argument for on Sunday, claiming their 13th consecutive Timmins Men's Baseball League championship with a tight 4-3 win over the Orioles in Game 5 of the best-of-five finals.

Marcus Verdu — who happens to wear No. 13 on the back of his uniform for the Whiskey Jacks — broke a 3-3 tie in the top of the sixth by driving in Jamie Dagenais with a two-out RBI single, while Chris Greer outdueled Orioles ace Marc-André Lavoie in a veritable battle of the titans on the mound.

“It's great to be a part of this,” said Verdu, celebrating with his teammates on Fred Salvador Field after game. “It's fantastic to play with such a great group of guys for this many years. I only started playing in the last couple, but it's fantastic playing with these guys.”

Verdu, who finished the regular season batting a modest .200, embraced the title of unsung hero on a team with a number of clutch hitters.

“I was zero for my career against Marc (Lavoie) until that at bat,” he said. “I'd never gotten a hit off him, ever, and I walked out there and I lucked out.”

In a long-awaited battle of the uncontested two best pitchers in the TMBL, Greer and Lavoie didn't disappoint.

Both pitched all seven innings of the title-deciding game, each allowing eight hits and three earned runs. Greer struck out nine batters to Lavoie's 11.

During the regular season, Lavoie's 5-0 win-loss record and microscopic 0.71 ERA was only marginally better than Greer's 3-0 record and 1.12 ERA.

Verdu credited Lavoie for another strong outing in a season for the ages.

“He pitched a fantastic complete game today, he pitched a complete game in Game 4, he's one of the best pitchers in the league,” said Verdu. “Man, we were just working hard to get anything off him in every inning.”

Despite the heartbreaking defeat Sunday — coming after an equally narrow 3-2 Orioles win in Game 4 to stay alive in the series — James Daschuk of the Orioles couldn't help but marvel as he watched Lavoie and Greer go head-to-head.

“They've got weapons — fastballs, change-ups, curveballs — you have no idea what's coming. Half the time it's a guessing game. Swing the bat and hope for the best.”

After the Orioles rallied from a 3-0 deficit to tie the game with a trio of runs in the bottom of the fourth inning, Lavoie forced Cedric Bradette to ground out and struck out Garret Latourelle to start the sixth.

But Dagenais kept the inning alive with a line drive single to right, and Matt Béchard followed suit with a single of his own to send Dagenais to third. That's when Verdu stepped up to the plate against his longtime nemesis and managed to squeeze a hard ground ball between Orioles' shortstop Daschuk and third-baseman Trevor Niemi for the go-ahead run.

“I got the head of the bat out there and I just poked (Dagenais) in,” said Verdu.

Though the Orioles finished 15-2 in the regular season, to the Whiskey Jacks' 10-7 record, the gap between the perennial TMBL rivals seemed to close considerably once the playoffs rolled around.

Greer attempted to explain the turn-around after the game.

“I think we just started taking every inning in stride, and also having all our guys out every game makes a big difference,” said Greer. “I know during the regular season, I think I only made a couple of games, and guys are on shift work so it's tough to get a consistent nine guys out there. But playoff time is a different story.”

The Whiskey Jacks' star pitcher also refused to accept the title of “workhorse” for his team.

“In the past, maybe I was the workhorse, but definitely not this year,” said Greer. “All the other pitchers had to pick up some of the slack. Guys like Cid (Bradette), Jamie (Dallaire), Dag (Jamie Dagenais), Phil Tan — I don't want to leave anyone out — everyone pitched great this year and kind of held the fort together when I wasn't around.”

Verdu, however, wasn't afraid to praise Greer's consistency and precision.

“He pitched a hell of a game, and we let him down in that one inning, giving up three runs, and we had to get them back for him.

“We trust in Chris, that if we just get a couple of runs in, we'll be great. He's a workhorse. He was just a monster here today.”

And though Lavoie is known for his control and quality of his pitches, a mistake against the very first batter of the game put the Orioles behind right from the get-go.

Dallaire led off the game at bat for the Jacks. Facing a full count, he was hit by a Lavoie pitch and given first base. After Dallaire stole second, he came home on a Greer RBI double to give the Whiskey Jacks a 1-0 lead before the Orioles even got to bat.

Both pitchers cruised through either lineup until the top of the fourth, when the Whiskey Jacks padded their advantage.

After Greer walked to lead off the inning and stole second, he rounded third and came home to score when Bradette forced the Orioles into an infield error. Latourelle followed that up with a single, and Dagenais plated Bradette with a single of his own to make it 3-0.

Greer ran into his only adversity on the night as the Orioles played a little small-ball to get back into the game. After Greer walked Lavoie and gave up a single to Dani Durepos in the bottom of the fourth, Daschuk finally got the Orioles on the board with an RBI single to drive in Greer.

With two men on, Pat Durepos successfully laid down a sacrifice bunt to advance the runners. Niemi's ensuing RBI single, Mario Fillion's base hit and Eric Boulard's sac fly allowed the Orioles to even the score at 3-3.

But Greer retired the last nine batters he faced in a row — including three straight strikeouts in the bottom of the sixth — and Verdu's clutch RBI stood up as the winner.

Though clearly disappointed after the game, Daschuk ensured the Orioles will be back next season to try to end the Whiskey Jacks' stranglehold on the TMBL title.

“It was fun,” said Daschuk. “Game 5, right? It's always fun playing in that situation, and with the two best pitchers in the league going head-to-head. It could have went either way, right? We didn't win obviously, but there's no shame in losing a game like that.

“We'll have the same team next year. We always keep pretty much the same team unless guys move out of town or what not. We have about 18 guys on our roster, and all 18 should be back next year.”

On the other side of the field, Greer said he'll enjoy No. 13 for as long as he can — although his sights already seemed set on No. 14.

“It's another season, another goal, and it'll be the same thing next year,” said Greer. “We're already working towards it.”