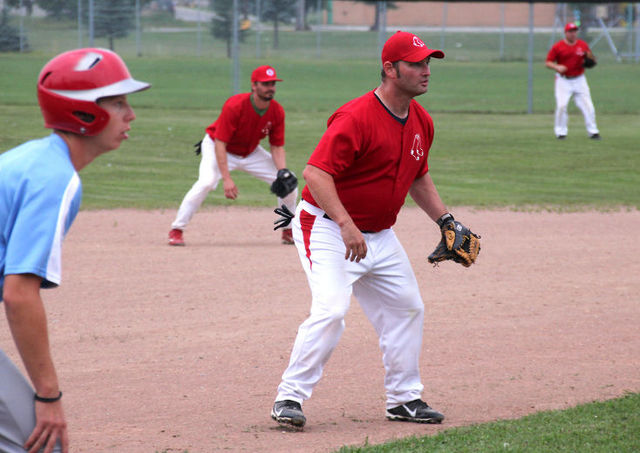 TIMMINS - The Red Sox ended the Timmins Men's Baseball League (TMBL) season on a winning note with a 17-6 victory over the Expos on Sunday night.

Sheldon Lacroix went 2 for 4 with a homerun and three RBI, while Eryk Rice went the distance on the mound for the Sox, who will now face the 12-time defending champion Whiskey Jacks in a best-of-five first round playoff matchup that begins on Thursday.

The Expos, meanwhile, hope to regroup before they open up the postseason on Wednesday at 7 p.m. against the first-place Orioles, who went a remarkable 15-2 over the course of the regular season.

In Sunday's season-ending tilt, the Expos barely had enough players to begin the game against the Red Sox. With only two outfielders, the Expos and starting pitcher Myles Lockhart watched the Sox jump out to a 5-0 first-inning lead.

The Expos, back at full strength with the arrival of emergency call-up and former TMBL slugger Al Kaija, chipped away at the lead over the next two innings.

Ashton Caron got his first of two hits of the night, and came around to score on a Stéphane Gaudet single to get the Expos on the board. Paul Charette eventually drove in Gaudet on a fielder's choice to make it 5-2.

The Expos added two more in the second on Caron and Gaudet RBI singles, but the Sox got one back to make it 6-4 as Conredge Solomon scored on an Expos error in left field.

Then things really unravelled for the Expos in the top of the fourth.

The Sox added five runs to make it 11-4, capped off by Lacroix's solo bomb over the right field wall at Fred Salvador Field. The Sox made it 13-4 in the fifth when Joel Rice came home on a pass ball and Tim Chalmers scored on a Rice sacrifice fly.

The Expos loaded the bases during their turn at bat in the fifth, and A.J. Anthony took advantage, driving in Gaudet and Thomas Scripnick with a two RBI single.

But that's all the Expos would muster, as Rice continued to cruise on the mound after a shaky start. The Sox added four runs in the top of the seventh, and Rice struck out two of the Expos' final three batters to pick up his second win of the season, to go with three losses.

Chalmers, Rice, Greg Therrien and Brent Cleverdon each finished with two RBI for the Sox on Sunday, while John Schumilak went 2 for 2 with one RBI.

With another complete game to his name, Rice finished the season leading the TMBL in innings pitched with 39 1/3. His next closest competitor, Adam Moloci of the Expos, threw 32 total innings.

Orioles' star Marc-André Lavoie finished a perfect 5-0 on the mound, topping the TMBL in wins. James Daschuk and Eric Paquette of the Orioles, and Chris Greer of the Whiskey Jacks, each recorded three wins to tie for second in that category.

Lavoie also finished first among pitchers in strikeouts with 56, averaging more than two per inning (25 1/3 innings pitched). Rice followed Lavoie with 46 strikeouts, while Jamie Dallaire of the Jacks had 39.

Perhaps Lavoie's most impressive stat on the season is his microscopic 0.71 earned run average. Greer of the Whiskey Jacks and his equally remarkable 1.12 ERA had to settle for second.

On the offensive side of things, Lavoie also led the league in RBI with 30, placing him ahead of teammates Dan Wafer and Paquette, who had 25 and 21 RBI respectively.

Dallaire and Paquette each stole 18 bases to finish first in that category, ahead of Eric Boulard of the Orioles, who had 15.

Boulard proved to be by far the most consistent batter of the season, winning the 2014 TMBL batting title with a .585 average at the plate over 16 games. Boulard's 38 hits and 41 runs scored were easily good enough for first in the league.

Boulard also recorded 17 RBI and 15 stolen bases to cap off a solid season for the league-leading Orioles, who will be looking to unseat the perennial champion Whiskey Jacks in the upcoming playoffs.

The TMBL postseason begin on Wednesday, Aug. 13 at 7 p.m. at Fred Salvador Field, as the Orioles take on the Expos in Game 1 of a best-of-five series. The Whiskey Jacks, meanwhile, get set to meet the rival Red Sox on Thursday, Aug. 14 at 7 p.m.

Both series will see Game 2 go on Sunday, Aug. 17 in a TMBL playoff doubleheader. First pitch between the Whiskey Jacks and Red Sox is scheduled for 4 p.m., while the Expos and Orioles will follow at 7 p.m.