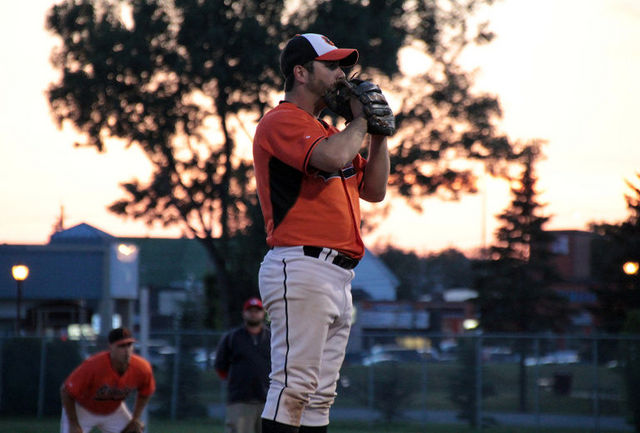 TIMMINS - Just when you thought you’d seen it all.

An unprecedented scenario during the second game of a Timmins Men’s Baseball League doubleheader on Thursday night at Fred Salvador Field gave the evening an almost surreal feel.

The hotly contested extra innings matchup between the Expos and Orioles finally came to a close at 12:23 a.m., making it the latest-ending game in TMBL history.

The timed floodlights at Fred Salvador Field actually turned off at 11 p.m. and had to be manually restarted by the field crew. Fielders and batters from both teams mingled on the pitch-black infield as the game was paused for around 15 minutes while the lights slowly came back on. A near-full moon in the clear night sky was the only source of light during that time.

The Expos valiantly fought back to tie the game 7-7 in the seventh inning, capped by a bases-loaded RBI walk drawn by James Chalmers.

But Orioles pitcher Eric Paquette incredibly went the distance on the mound, going all 10 innings in a 10-7 win, and crushing the Expos’ hopes for their first victory of the season. The Expos remain in last place in the TMBL standings with an 0-6 record on the year.

Despite the loss, Adam Moloci and Thomas Scripnick combined solid performances on the mound for the Expos.

Earlier in the evening, Aaron Lemieux had a big night at the plate in the Whiskey Jacks’ 7-6 win over the Red Sox — but he certainly paid a price for it.

In addition to going 2 for 2 at bat with three RBI, Lemieux was hit not once, but twice by pitches from Red Sox hurler Tim Chalmers.

But the Whiskey Jacks’ second-baseman was able to ice his bruises knowing his team kept pace with the Timmins Men’s Baseball League-leading Orioles, who remained in first place in the standings after their marathon 10-7 win in 10 innings over the Expos.

Whiskey Jacks’ third-baseman Adam Shipway had a strong game, going 2 for 4 with two RBI for his team, which scored all seven of its runs against the Red Sox in the first two innings of play.

The Jacks jumped on Red Sox starting pitcher Sheldon Lacroix for three runs in the first inning. Leadoff batter Jamie Dallaire, who pitched all seven innings to pick up the win for the Jacks, hit a single and eventually came around to score on a wild pitch. A few batters later, Lemieux drove in Shipway and Jamie Dagenais with his first hit of the evening. Lacroix managed to pick off Lemieux at second base to limit the damage with the Jacks up 3-0.

The Sox responded, scoring three of their own. Eryk Rice hit an RBI double and came home to score on an Eric Comtois base hit. Comtois then did the unthinkable, stealing home base to tie the game at 3-3.

But another huge inning by the Jacks put the Sox in a hole they couldn’t climb out of. Shipway hit a two-RBI single, and Garret Latourelle followed that up with an RBI single of his own.

With the bases loaded, Lemieux was hit by Chalmers, who was still getting his arm warm after coming on in relief of Lacroix to face Latourelle one batter earlier. That made the the score 7-3.

The Sox managed to cut the lead to 7-4 in the bottom half of the second, and added another run in the third on a Conredge Solomon RBI single.

In the bottom of the fifth, Red Sox leadoff batter Comtois saw a pitch from Dallaire he liked and smashed it over the outfield fence for a solo homerun to make it 7-6.

But Dallaire responded by going on an absolute tear. Immediately after allowing the Comtois homer, Dallaire retired nine batters in a row to end the game in dominant fashion. Five of those nine outs were strikeouts.

Dallaire picked up his first win of the season, going seven innings, allowing four earned runs and striking out 12 Red Sox batters in the process.

The Expos continue to seek their first win of the season with back-to-back games against the Whiskey Jacks and Red Sox on Sunday and Monday at Fred Salvador Field. Both games are scheduled to start at 7 p.m.