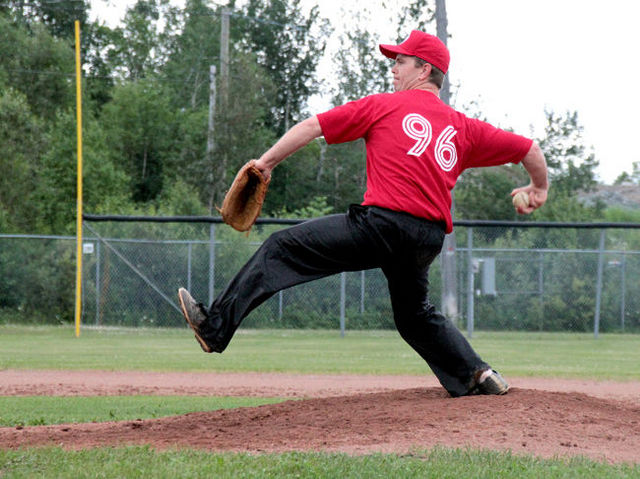 In the second game of the twin bill, the Whiskey Jacks blanked the winless Expos 12-0 in a game abbreviated to five innings because of the mercy rule.

That victory improved the Whiskey Jacks’ record to 4-2, while the Orioles 10-9 loss to the Red Sox dropped their mark to 4-2.

Chris Greer and Cedric Bradette combined to limit the Expos to three hits, with Greer picking up the victory.

He struck out seven and walked just one in three innings, while Bradette had two strikeouts and a pair of walks in his two innings of work.

Kurt Foisy, Adam Moloci and Myles Lockhart had the only three Expos hits, all off Greer.

The Whiskey Jacks pitchers got plenty of offensive support, as they counted two runs in the first inning, one in the second, six in the third and three in the fifth inning.

Jonathan Minard paced the attack for the winners, going three-for-four at the plate, while driving in a run and scoring a pair.

Phil Tan also had a hot hand for the Whiskey Jacks, as he drove in five runs, while going two-for-three, with a double and scoring a run.

Lead-off hitter Jamie Dallaire went two-for-three at the plate, while driving in a run and scoring a pair of runs.

Moloci started the game and took the loss for the Expos.

He gave up six hits and allowed nine runs (seven earned) in two and two-thirds innings, while striking out two batters and walking six.

Thomas Scripnick pitched the final two and a third innings for the Expos, giving up four hits and three runs (all earned), while striking out three batters and walking a pair.

The first game of Monday’s doubleheader saw the Red Sox score five runs in the bottom of the seventh inning to come from behind and post a 10-9 victory over the Orioles.

With the victory, the Red Sox improved to 3-2 — just a half game behind the Whiskey Jacks and the Orioles.

Conredge Solomon was the offensive star for the Red Sox, going three-for-four at the plate and hitting a home run, while driving in four runs and scoring a pair.

Darren Rowntree was also three-for-four at the plate and drove in three runs and scored a run.

Eryk Rice, Tim Chalmers and Joe Lepage each had a pair of hits for the winners, while John Schumilak and Eric Comtois each scored a pair of runs.

Rowntree pitched the final two innings for the Red Sox and picked up the victory.

He allowed four runs (all earned), on five hits, while striking out none and walking two batters.

Brent Cleverdon pitched the first five innings for the winners, and gave up five runs (all earned) on nine hits, while striking out four batters and walking two.

Dan Wafer went four-for-four at the plate for the Orioles, while driving in three runs and scoring a pair.

Daschuk counted a triple and a double among his hits, while Fillion had a pair of doubles.

Trevor Niemi went the distance on the mound for the Orioles, scattering 14 hits, while surrendering 10 runs (eight earned), striking out a pair of batters and walking four.

Action in the league is scheduled to continue Fred Salvador Field on Tuesday night, with the Red Sox again taking on the Orioles.