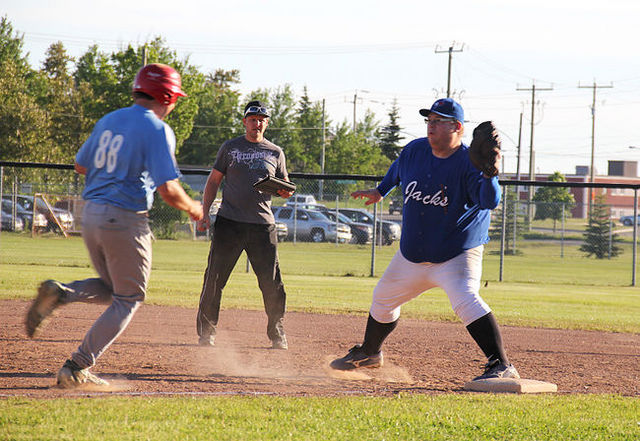 TIMMINS - The Whiskey Jacks handed a short-staffed Expos team its worst loss in franchise history with a 19-1 shellacking on Thursday night at Fred Salvador Field.

The Jacks, now 2-0 on the 2014 Timmins Men’s Baseball League season, have won 12 consecutive league championships, and seem poised to challenge for the title once again.

For the Expos, things aren’t so rosy.

After an encouraging opening game on Monday – albeit a matchup the team let slip away in extra innings, losing 13-12 to the Red Sox – the Expos are still seeking their first win of the season.

After walking Expos leadoff batter Kurt Foisy, Tan struck out three consecutive Expos to end the top of the first. The Whiskey Jacks responded with a seven-run bottom of the inning off Expos starter Adam Moloci.

Moloci walked the first four batters he faced, but didn’t get much help from his team, which committed three costly errors in the first inning.

After getting rid of the Expos batters in order in the second inning, Tan helped his own cause during his turn at bat, getting on base with a line drive single. He eventually came around to score on a pair of pass balls, making the score 8-0.

The Expos’ defense finally settled down, and they got on the board in the top of the third inning.

Stephen Morgan stole second base after hitting a single to right field, and came around to score when Whiskey Jacks shortstop Jamie Dallaire threw the ball over his first baseman’s head trying to get Foisy out.

That would be the high point for the Expos on the night.

The Whiskey Jacks tacked on two in the third inning to make it 10-1. Cedric Bradette hit a single and scored on a Jonathan Minard triple. Minard came in to score a few throws later on a wild pitch.

With only nine players on the roster – and no pure pitchers, as regular starter Dave Quachegan was unavailable after throwing a whopping 176 pitches in Monday’s loss – the Expos had no choice but to turn to catcher Sheldon Belanger to finish the game on the mound.

The Whiskey Jacks continued their solid hitting, and a few more Expos’ errors later, it was 19-1 and the game was over.

By the TMBL rules, if a team is up by 10 or more runs in the fifth inning or later, the game is called off. Regular TMBL games normally last seven innings.

Tan pitched all five innings to pick up the win on Thursday, allowing no earned runs, striking out seven and walking only one batter. He also led the way on offense for the Jacks, going 2 for 4 with four RBI on the night. Minard also went 2 for 4 for the Jacks, finishing with two RBI.

League action pauses for the weekend and continues on Monday at Fred Salvador Field. The Whiskey Jacks look to remain perfect on the year when they face the Red Sox (1-1) at 7 p.m.

The Expos will hope to pick up their first win against the mighty Orioles the following night on Tuesday, June 24 at 7 p.m.